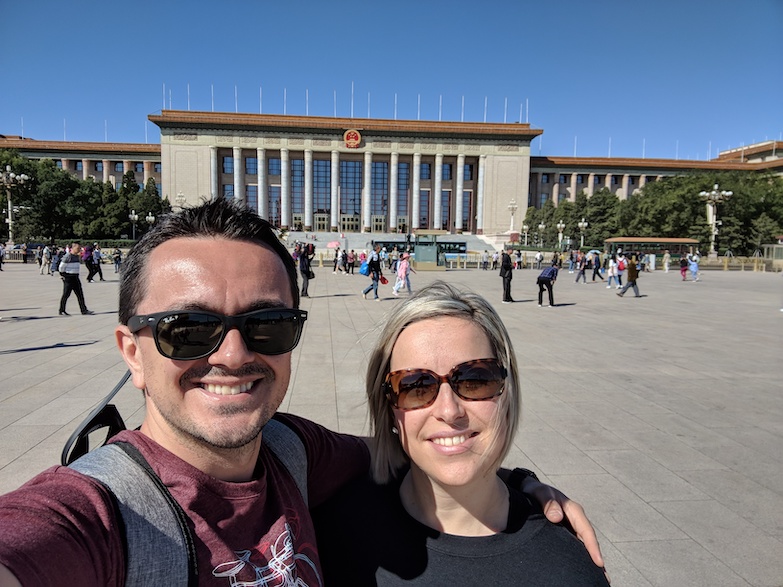 This is the first post in the series about our vacation in China in the fall of 2018.
On the morning of 21st September, we got up and wandered around the street “Ju’er Hutong”
and the nearby suburbs of Beijing (Peking).
Plan for the day was to visit as much as possible around Tiananmen square.

Tiananmen square is a city square in the centre of Beijing, China, named after the Tiananmen (“Gate of Heavenly Peace”) located to its north, separating it from the Forbidden City.

Since our hotel wasn’t far from public transportation, we caught a local bus (each ticket only 2 CNY/RMB) on “Jiaodaokou S St” which took us all the way to the station between gate to the Forbidden City and other monuments of Tiananmen Square (Chan’ an Ave).

After getting off the bus, we crossed underground tunnel to get to the other side of the Chang’ an Ave with exit next to the National Museum of China. Since I have decided to cover this museum in separate post, I will not go into too many details here. Interesting facts are that the entrance is completely free even for the foreign tourists and we spent 2h only touring one exhibition on the first floor of the west wing. The museum is so large that it could easily take a day to see all the exhibitions.

On the west side of this monument we had a chance to see the Great Hall of the People which is used for legislative and ceremonial activities by the government of the People’s Republic of China (PRC) and the ruling Communist Party of China (CPC).

Since we toured the square right before the Mid-Autumn Festival in China, there was already a lot of tourists and locals on the square and it was too busy to go inside of the Mausoleum of Mao Zedong. However we did take a chance to take a pictures in front of it. Mao Zedong (December 26, 1893 – September 9, 1976), commonly known as Chairman Mao, was a Chinese communist revolutionary who became the founding father of the People’s Republic of China, which he ruled as the Chairman of the Communist Party of China from its establishment in 1949 until his death in 1976.
Although Mao had wished to be cremated, this was ignored and his body was embalmed. The construction of a mausoleum as his final restplace began shortly after his death. This building is located in the middle of Tiananmen Square but south of the Monument to the People’s Heroes.

Since our goal was to explore the Forbidden City, we moved on in the north direction of the square. Before we crossed big street again, we passed by the large flower basket. These flowers are 17-meter-tall display in the shape of a flower basket at the center of the Tiananmen Square for the celebration of the National Day. It means “Good Luck, China”.